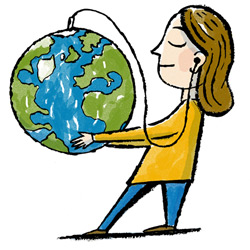 For me, 2016 was the year of the podcast. While I know they’ve been around forever (one of my friends was doing one ages ago where she discussed The Young and the Restless) I didn’t find them accessible until I downloaded the podcast app on my phone and could subscribe to as many as I wanted. As a mom to a golden retriever, I walk a lot—for his benefit—as well as mine. I don’t always have friends who want to hit the streets when I do, and I’ve listened to the Hamilton soundtrack about a thousand times, so I needed something new to occupy my brain.

I love podcasts because they allow me to listen to conversations with so many people I wouldn’t hear from otherwise. My belated Groundhog Day gift to you is to start with a few recommendations for podcasts that have enlightened and entertained me this past year.

Pop Culture Happy Hour: My friend Katherine turned me onto this. It’s all about what is happening in pop culture whether it’s recent movies, TV shows, books, and music. Even though by definition, pop culture puts you in the heart of mainstream entertainment, PCHH manages to skate around the edges at times when one of the guests share a recommendation I’ve not heard. The best part of PCHH is the “what makes you happy” they end on each week.

Trumpcast, by Slate: It probably doesn’t take much detective work for you to learn that I am not a fan of Trump. That said, I think the cheap shots about the size of his hands, his spray on tan and his hair are just that—cheap. I want actual information on his ideas, his policies (where we’ve seen them) and how his presidency will influence and interact with very known quantities out there. My friend Penny turned me onto Trumpcast which has been airing since last March. Trumpcast has always taken DJT seriously and after the election they’ve amped up their commitment to understanding who the man is and what his effects may be. Some of the best episodes were One Big Giant Conflict of Interest, and Project Alamo Or: How Trump Duped the Republican Party Into Funding Their Own Destruction. Each podcast starts with an actor who reads Trump’s tweets, which are funny in his spot-on portrayal, but enlightening in presenting the man at his word(s). Plus is saves me from following him on Twitter.

Tim Ferris: The author of the 4 Hour Work Week and the 4 Hour Diet, etc. is all about productivity. He’s insanely curious about how others work and his latest book, Tools of Titans is a collection of most of his podcasts with his hundred+ guests on his show. For me, I cherry pick to listen to the guests I’m most interested in learning from or who peak my interests for whatever reason. I totally enjoyed his episodes with Malcolm Gladwell,( been a fan of his books for years) Ezra Klein (didn’t know much about before the election, but he seems interesting) and Seth Godin(didn’t know a thing about him, but wow, very creative thinker. Ferris has this dude-ish vibe about him. Sometimes it feels like he’s hosting a guys clubhouse given that women make up a tiny fraction of his guests and I don’t think he has the messiness of raising a family to impede on his well-tested systems, but I do appreciate the questions he asks and that he allows his guests to elaborate. This might be what leads to my other criticism about his podcasts, they are long!! It took me three days to get through the hour and a half Seth Godin interview, which can seem like a big commitment if you’re pressed for time.

Invisibilia: This podcast explores the hidden and not so hidden ways we are nudged to behave. My absolute favorite episode, one everyone should listen to is Flip the Script. Listen to it. It may change how you think about everything.

**I’m adding a bonus podcast episode here. I haven’t listened to most of his podcasts, but Ezra Klein’s interview with Ta-Nehisi Coates was one of the most intelligent conversations I’ve heard this year. At points in the podcast Andy and I turned to each other and repeated what we just heard with a huge “WOW” on our lips.